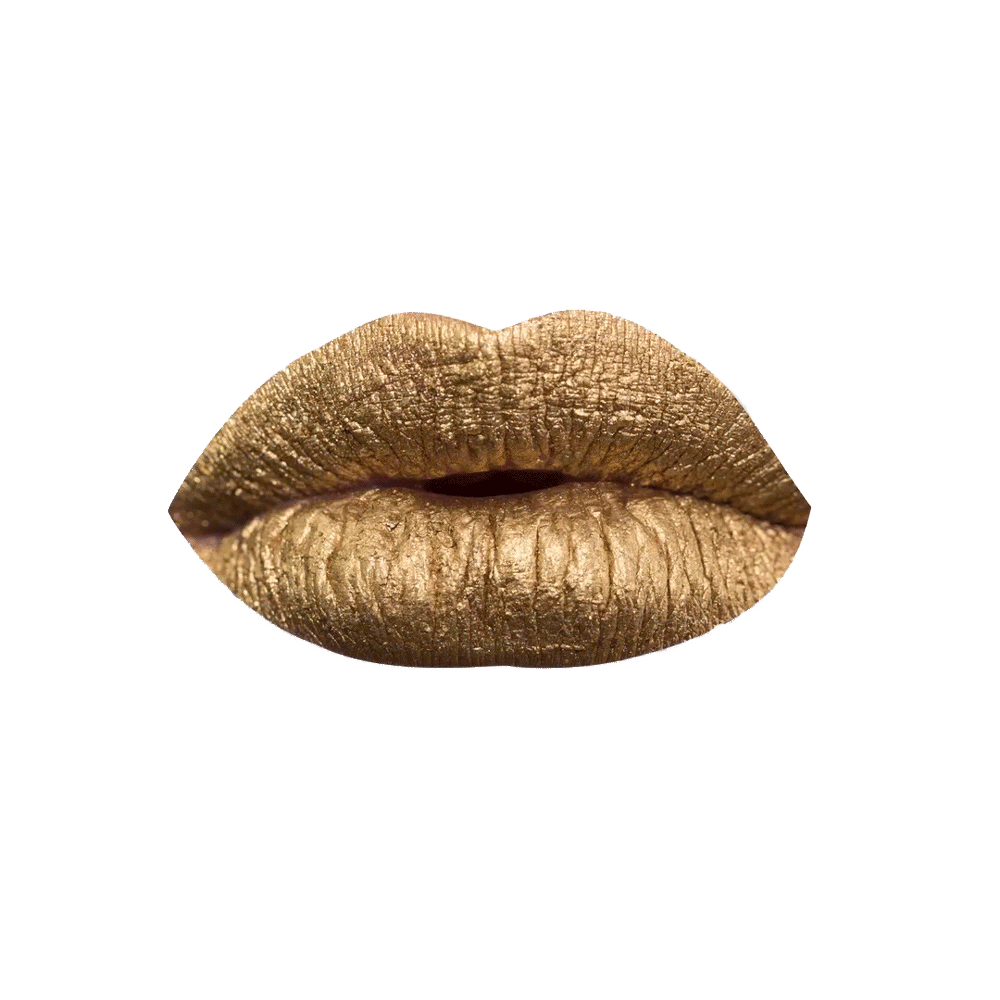 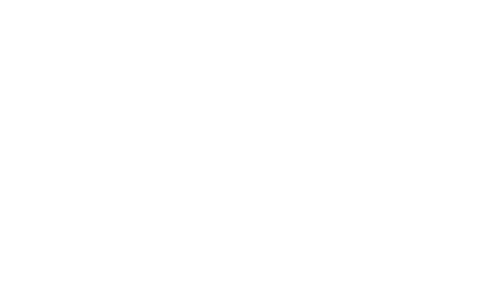 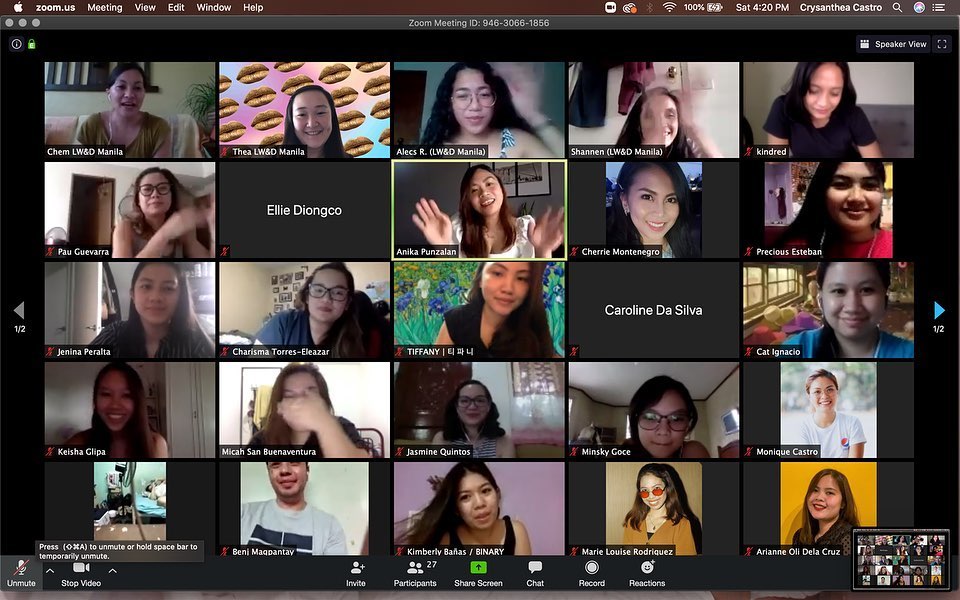 Let's sit down and share the space.  Sisterhood is a bond that flows beyond blood. It's the connection our souls make with the people we start a conversation with and end up creating something new, meeting someone new, and knowing something new about ourselves.
2020 Year in Review 2020 was the beginning of a new decade, a year that started out with much hope for a brighter future, a clearer picture of what's to come, and a vision of a world bustling with milestones to reach. It was also the year where we felt that everything was put to a halt. The question that begs to be asked is this: did the world really stop?  With the intimate conversations that turned into webinar-style catch-up sessions, even when what we are all used to start feeling impersonal, disconnected, we all tried to abide by what's safe and what's needed. Even when we felt that the magic has been lost due to the constant need to check if someone's microphone was not on mute, if the group can see the visuals, when time is much more limited because of everyone's busy schedules, it was a nuisance we all adjusted to. The space we held for silent, loud, victorious, shy voices to be heard felt lost.  Together, despite the obstacles, we ended up with a year of healing & growth 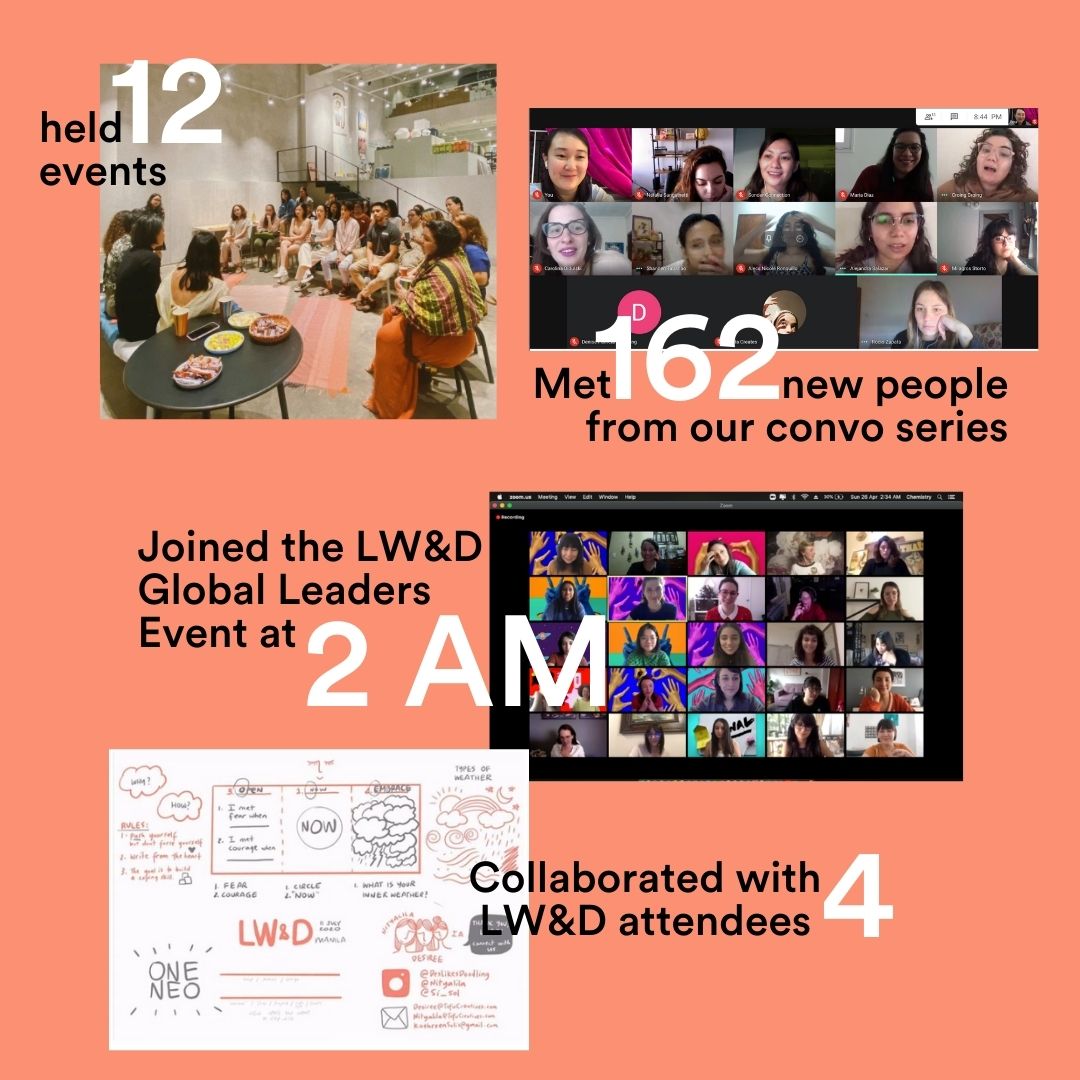 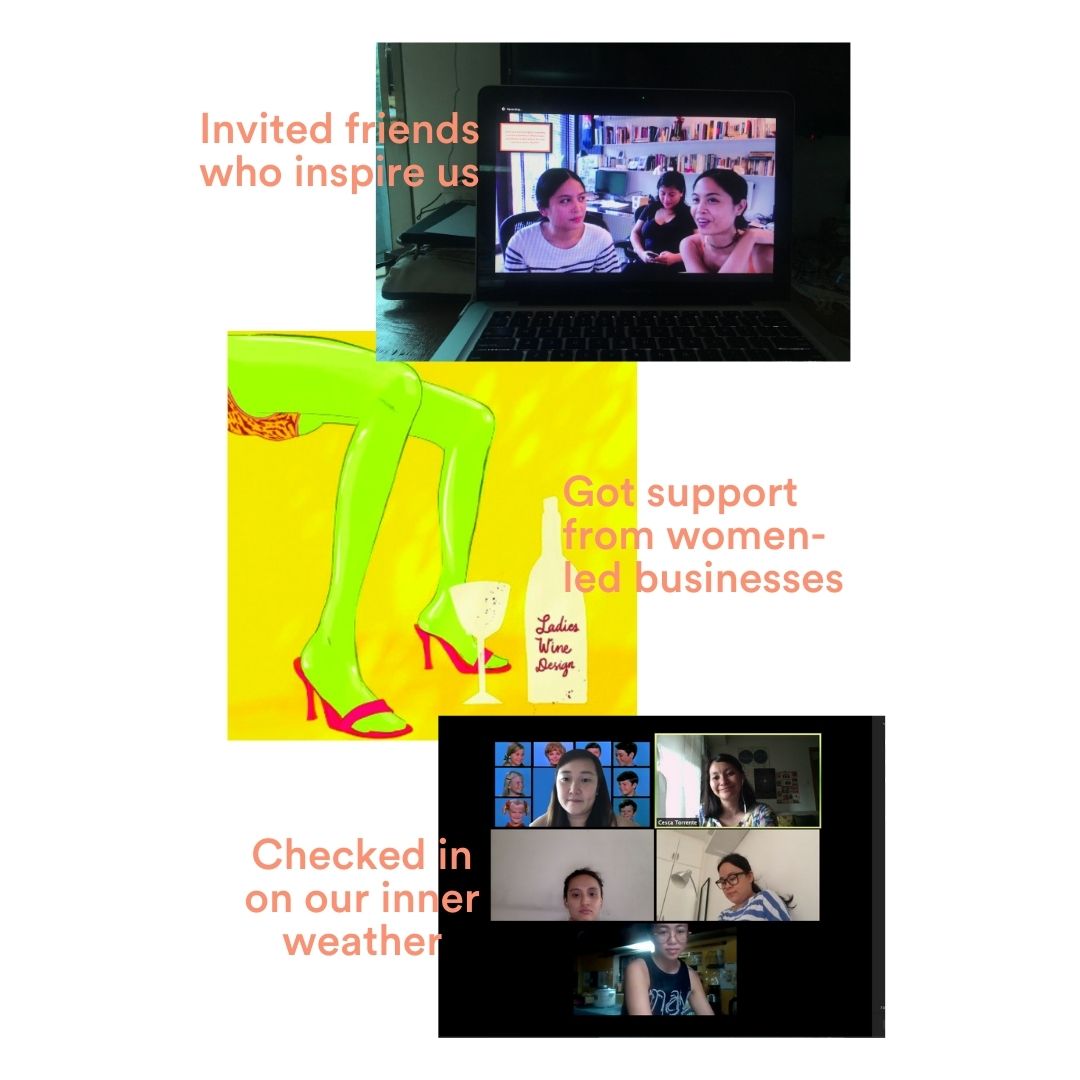 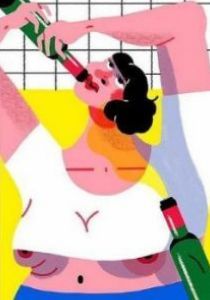 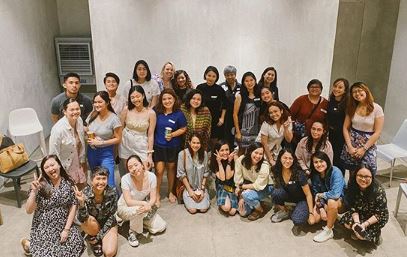 20:20 Vision Event, February 2020 We are grateful for living through creating. We share joy in seeing many people extend their generosity through creative movements to navigate through the pandemic, live with the pains of politics, and to serve as a voice of Filipinos who are exhausted with being called resilient after calamities.  We are grateful for the power of presence.  Even when we are alone with ourselves. Staying in the now, showing up for ourselves when we need it the most, and the energy to face each day with a hope for a brighter tomorrow. 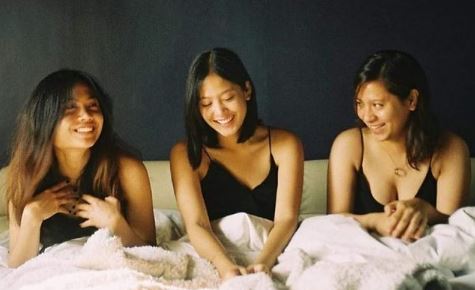 The Business of Sisterhood

We often hear the quote “tell me who your friends are and I’ll tell you who you are”, which explains how we have the freedom to choose whom we surround ourselves with. The people we have around us can shape the way we see and do things, this could either be for the good or the bad, but that’s for us to decide.

On December 12, 2020, for our last Convo Series session of the year, we recapped this topsy turvy 365 experience by inviting a group of women that can share about their roots. Any woman can thrive in an industry but together, women can redefine systems. We invited the sisters behind CAN Creative Capital, a family of companies with interests in the creative industries. On the daily, the sisters maximize each other's multi-potentials by bringing in their capabilities when they face decisions that involve running the business successfully and staying true to their concepts, values, and the mission to make the Philippines brighter everyday. One sister manages the business as a whole, another keeps the show interesting, while the other makes sure that the business stays efficient and flexible. Dani's passion for organization, coffee and soul mesh well with Anna's  proficiency in articulating the right messaging and Sarah's expertise in creating efficient design complements in gluing the siblings bond together.

Sarah, the principal architect and creative director of Greener and Partners Properties, Inc. and a baller in her past time.

Anna is the creative director of CAN Creative Capital. Outside, she is currently the editor in chief of CNN Philippines Life and is a passionate ballerina.

Dani is the managing director of CAN Creative Capital and is the president of Type A Coffee and a very athletic volleyball and soccer player.

Their personal credentials are very impressive but their chemistry gives birth to a mountain of beautiful things and experiences. The sense of togetherness that they share among each other only proves that there is strength in numbers, especially in numbers of women.

The siblings share that they grew up together doing very different things. Anna and Sarah always had a knack for creative pursuits while Dani was passionate about music, art, and later on, technology. Fast forward to their years into their own professional careers, they had a natural pull to do things their own leading to the incorporation of CCC. They created a holding company to hold space for all their individual talents and skills to shine and mesh together.

After coming together and talking about their careers, they opened up about a future that they wanted for themselves that will eventually ripple onto their dream of building communities. Sarah shares that the way they raised truly impacted the way they sought out their dreams. Fathered by an economist and with their Mother being in the creative industry, their parents would often kid with them that their first ever social experiment was giving their kids the permission to take their own path and what to study in their university years. 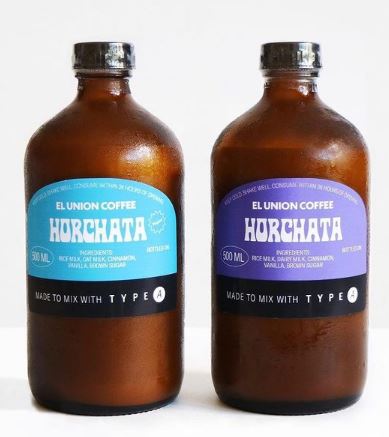 The younger sisters would share that their eldest sister (second to their eldest brother) Sarah, as the one who always knew loud and clear the road she was taking and so did she. She eventually became an architect and has bloomed in a field that is mostly dominated by men. She was always the one who accomplished things on her own and her younger sisters would often ask for her advice. When the time came that Dani wanted to pursue a career and a business in the coffee industry, she had many doubts and hesitations but was moved by a friendly advice from her ate Sarah. She shares that her ate once told her “It’s going to be scary. It was also scary when I started going for the things I wanted but I still decided to do it because I knew that I would do whatever it took to make it work”. That stuck with Dani for three years until she finally decided to go full time with her sisters in building up the company. Sarah shares that she was also hesitant when they began but she knew that whatever the outcome was, the three of them would make sure it worked. Coming off of her experience in running a coffee business that she eventually had to separate from, Sarah knew that she was now more armed and equipped, to know what to do next, she says “Some of the best opportunities come from our lowest points and failures”. Anna mentions that when she was about to join the company, she thought she was leaving behind something that was already great but she jumped into a bigger and much more exhilarating adventure with her sisters when she decided to leave her corporate work.

When asked about their sibling dynamic, Anna shares that she has found real friendships within her siblings. They mentioned that everyday is a re-discovery of each other and because of the deep dynamic with. The constant change in each persona is what truly defines their relationship as a family. Dani shares that “Even the people you love the most will be different from you and that’s okay”.

We asked them how the way they grew up has shaped the way they do business together and Anna shares that “We were in an environment where there was no hesitation to be yourself” and thus still remains on how they create decisions for their company. Sarah shares that each of them has a clear set of responsibilities but they still have a long way ahead of them and the responsibilities evolve as they go along. Dani shares that their family was not really the entrepreneurial kind but they each had their own passions. She shares that the combination of luck plus the effort and time they invest into the company was adapted from how they were when they were growing up together.

Chem, LW&D co-founder asks the sisters about what it is like to work with a strong core of women. They share that age is important, especially when you want to see into different perspectives but still find a ground where you could relate to each other's ideals and understand how they perceive things. Anna shares that when you work with women, you realize how much care can be infused into it. The ideas are powerful and developed. The sisters explain that there are a lot of strong benefits when you have women as a part of your day to day, it can prepare you and help you know how to react in an unexpected situation.

The Canlas sisters maintain their loving siblingship over wine, lots of communication, and loving confrontations. They have learned that they have to be accountable for each other and calling each other out on some things have actually helped them grow together, understand each other better, and make a bigger space for bringing their beautiful ideas into life. Together, they are fond of travelling and as a family, are obsessed with food. Their love for food has given them a sense of togetherness and it becomes their shared favourite experience along with their parents. Their story of building the company together knowing that all they had was each other was inspiration enough to the participants of the session. Sisterhood goes beyond familial ties and in your soul sister, you may eventually find potential partners or workmates among your friends.

We hope that you liked our last session for the year and we look forward to more conversations that shape our lives little by little. There is strength in collaboration and choosing to stay in our country to make our creative economy thrive creates hope for the generations that follow.

To find out more about LW&D Manila and if you are looking to collaborate, shoot us an email! Our mailing address is: sonderconnection@gmail.com